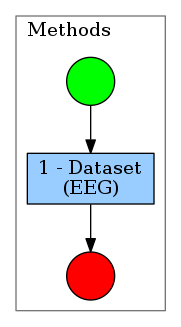 A total of 20 healthy volunteers (9 female, mean age 30, standard deviation 6.8, 18 right handed) was evaluated. All the volunteers did not have any neurological pathology.

Other versions of this experiment

Before downloading Dataset and metadata of the article "Context tree selection for functional data" ...

Before you download, you must know this experiment is licensed under Creative Commons Attribution 4.0 International License and requires that you comply with the following:

You must give appropriate credit, provide a link to the license , and indicate if changes were made. You may do so in any reasonable manner, but not in any way that suggests the licensor endorses you or your use.

How to cite this experiment: